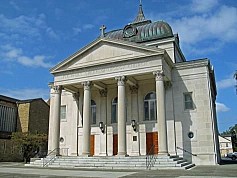 A Brief History of Our Parish

The years between 1928-1937, although scarred by the effect of the Great Depression, were also the years of many firsts. The first Sunday School for children was organized in the late 20’s. The first mixed choir was organized in 1930. Robes were sewed by the mothers of the community. From this time forward choral singing of male and female voices replaced the cantor in the regular Divine Liturgy and other services.

During this time, the local chapter of the AHEPA, American Hellenic Educational Progressive Association, was organized in 1923. Its purpose was to “advance and promote pure and undefiled Americanism among the Greeks of the United States, and for the benevolent aid among this nationality.”

The Archdiocese of North and South America was formed and on February 24, 1931, a new era began. “Archbishop Athenagora Day” was proclaimed in Savannah and the Archbishop officiated at Church Services.

In 1932, through the efforts of the Archbishop, the Ladies Philoptochos Chapter of St. Barbara was formed.

On August 25th, 1941, the St. Paul’s Parish purchased the Lawton Memorial Building from the City of Savannah. A two year program of renovation was undertaken to transform the structure into a beautiful house of worship.

On May 9th, 1943 the new church was dedicated with Bishop Gerasimos officiating. It was also in 1943, when Fr. John Hondras, came to St. Paul’s. He was among the first graduates of the first Greek Orthodox Seminary in the U.S. Holy Cross.

In 1954 the St. Paul’s Parish hosted the 12th Biennial Clergy-Laity Congress of the Greek Archdiocese and founded a Chapter of Senior GOYA.

The Golden years were climaxed in 1957 with a celebration honoring the 50th Anniversary of the St. Paul’s Parish.

In 1958, the building behind the church was purchased and used for a Sunday School annex.

In 1963 the growing parish purchased the five remaining buildings behind the Church.

In 1971, Fr. Frank Kirlangitis succeeded Fr. Paris. During this decade St. Paul’s gave three of its sons to the priesthood: Fr. Pete Lawdis, Fr. James Carellas and Fr. John Caparisos. In the field of politics, it gave the City of Savannah, its first Greek Mayor, the Honorable John Rousakis.

In 1982, the seventy-fifth anniversary was celebrated with much spiritual and social festivity.

1985, Fr. Theodore Papafil succeeded Fr. Kirklangitis. Progress continued in the Parish. This year also marked the beginning of the “Savannah Greek Festival”- a few days where Orthodox religion, Greek culture, heritage and hospitality can be shared with the people of Savannah and the surrounding area.

During Fr. Anthonys’ time at St. Paul’s the Church began to talk of Renovating and much of the fundraising was started.

In 1998, the plans to completely redesign and change the interior and exterior began.

In January of 2000, St. Paul’s began a major renovation project. Work was done to repair and update the interior and exterior of the Church.

On May 22, 2001 the Georgia Historical Society dedicated a historical monument to General Alexander Lawton and St. Paul’s Greek Orthodox Church. The marker now stands outside the Church to tell everyone who passes the story of our Church.

Early 2001 marked the completion of the renovation of Church. On June 29th and 30th, 2001, the Feast Day of St. Paul, His Grace Alexios, Bishop of Atlanta officially Rededicated St. Paul’s. The weekend was full of Celebration!